Hey there. Well, in case you didn’t notice, last week I didn’t upload a playlist. A few changes came up in my day-to-day life the last couple of weeks that took a much larger chunk of time than I expected, so for this week I’m presenting a longer playlist without the notes, as I have previously done. I aim to be back next week with a newly updated playlist, for now I present to you Week 9 & 10.

If you have an upcoming event that you would like included in the weekly concert list, or would like your music considered for the weekly playlist, please email me at ryan@tunesinto.ca.

I present the first playlist of the new incarnation of Tunes in TO. I’ve made some notes on each of the artists I’ve included below, so you can see why they’ve been chosen for the week. I’m looking forward to doing this on a weekly basis, and you’ll be able to find this post every Monday morning. Feel free to subscribe, or let me know what you think.

2018 was a good year for Kacey Musgraves. Though I wasn’t a big fan of her disco/country crossover hit “High Horse”, I find myself repeatedly listening to the song I’ve included here, “Slow Burn.” She’ll be at the Danforth Music Hall this coming Friday, January 11th, with support from Natalie Prass. This one’s been sold out for a long time, so if you’re looking for tickets, good luck.

The week before that, Deerhunter‘s new album Why Hasn’t Everything Already Disappeared? will be released, via 4AD Records. The album will be released on Friday, January 18th and they’ll be performing at the Danforth Music Hall on February 21, with support from Mary Lattimore. Tickets can be purchased through Ticketmaster for just over $40 (incl. fees).

Over the holidays I discovered Kanopy, the free streaming service where all you need to start an account is a library card. One of the movies recommended was Hearts Beat Loud (see trailer above), which was an entertaining story about a father/daughter who gain fame when they record a song in one of their jam sessions, which ends up becoming a viral hit. It stars Nick Offerman and the track’s vocalist, Kiersey Clemons, and there is a lot more to it than I just described, but it’s worth seeing if you’re into quirky comedy.

One of the albums Nick Offerman’s character recommends in the film, as the owner of a record store, is Animal Collective‘s Merriweather Post Pavillion. That album turns 10(!) years old this week, and one of my favourite memories involving them is seeing a bunch of fans dancing to “Brother Sport” during their headlining set at Pitchfork Music Fest in 2011.

I found General Crush on the weekly new release playlist on Spotify. “Who is that?” is my first exposure to them, but it’s a pretty good first impression. Looking forward to hearing more.

Blackalicious just announced a show here in Toronto, and they’ll be at Lee’s Palace on March 2nd. We last heard from them in 2015 with Imani Vol. 1. As it was intended to be the first release in a trilogy, perhaps we’ll get to hear some of Vol. 2. Tickets are $23.50 (+ fees) and available at Ticketfly.

I’ve decided I’d like to include a cover with every playlist, and seeing as how David Bowie‘s birthday this week (January 8th), I thought I’d celebrate by including one of my favourites: Warpaint‘s cover of “Ashes to Ashes”.

Though I’m not a gamer, I was pretty excited to find out that D’Angelo had a new track that appeared in Red Dead Redemption 2. Not holding my breath for a new album anytime soon, but it’s always good to know D’Angelo is still working on something. His last album, Black Messiah was fantastic, and lead single “Ain’t That Easy” was one of my favourites of 2014/2015.

One thing I decided to do last year was to finally start watching Schitt’s Creek. I can proudly say I have caught up (including the holiday episode) and I am looking forward to the new season, which starts tomorrow. One of the loveliest moments in the last season was when Patrick (Noah Reid) serenaded David (Dan Levy) with an acoustic rendition of Tina Turner’s “Simply the Best.” I know I said I wanted to have one cover per week, but given the timing, for this week I’ve decided to make it two.

Beliefs‘ Jesse Crowe released her solo project Praises‘ first album In This Year: Ten of Swords at the end of 2018, via Hand Drawn Dracula. Catch her performing her dark, electronic sounds this Friday, January 11th at Baby G. Tickets are $10.00 and can be purchased in advance via Ticketfly.

Tallies released a series of singles to finish off 2019, and their anticipated debut album will be released this Friday, January 11th, also via Hand Drawn Dracula. Give it a listen, or check it out live at their album release show at The Drake Underground on February 1st. Tickets are only $13.50 and they’ve still got them at Rotate This and Soundscapes.

Rapport are part of Exclaim’s Class of 2019 series and will be playing on January 25th at The Monarch Tavern. The band are made up of ex-Moon King/Spiral Beach vocalist Maddy Wilde, Kurt Marble and Mike Pereira (Most People). “Unconscious” is the only song they have on their Spotify page, so maybe they’ll just play this song over and over? Only way to find out is to hit up The Monarch to see them (and Ellis!) 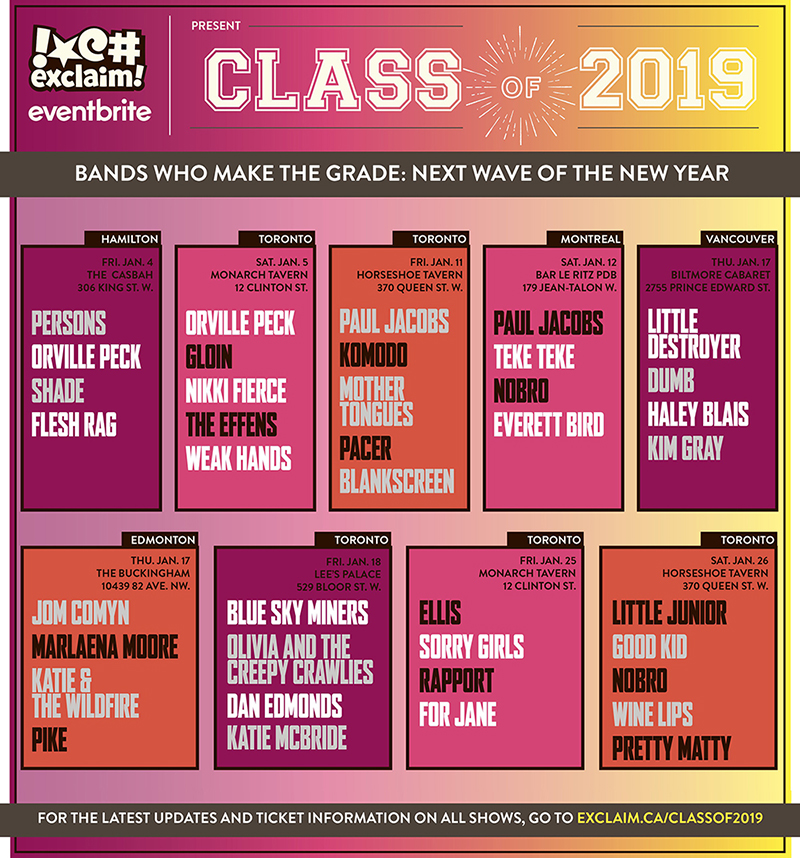 After recent opening spots with Big Thief, Whitney, and an upcoming tour with Cass McCombs, Sam Evian seems poised to be on the verge of breaking out. Check them out at The Horseshoe Tavern in support of he aforementioned Cass McCombs on Monday, March 11th. Tickets are $17.50 (+fees) and according to their site, Soundscapes still has them, but Rotate This is sold out. You can also buy them through Ticketfly, and seeing as how they’re selling out you might want to scoop them up sooner, rather than later.

After postponing their gig in September, Cuff the Duke rescheduled their show at The Rivoli for this coming weekend, with not one, but two shows on Friday, Jan. 11th and Saturday, Jan. 12th. Tickets for Friday night are still available at Ticketfly for $20.00 + fees, but Saturday is sold out.

Lastly, I am a vinyl collector, and since Christmas just passed, I was gifted with a copy of TV on the Radio‘s fantastic debut Desperate Youth, Bloodthirsty Babes from my wife. I decided to put the song that hooked me on to the band in the first place. Here’s hoping we see something new from them in the coming year.

Be sure to check back next week! And if you have any suggestions or comments, please leave them here, or email at ryan@tunesinto.ca.